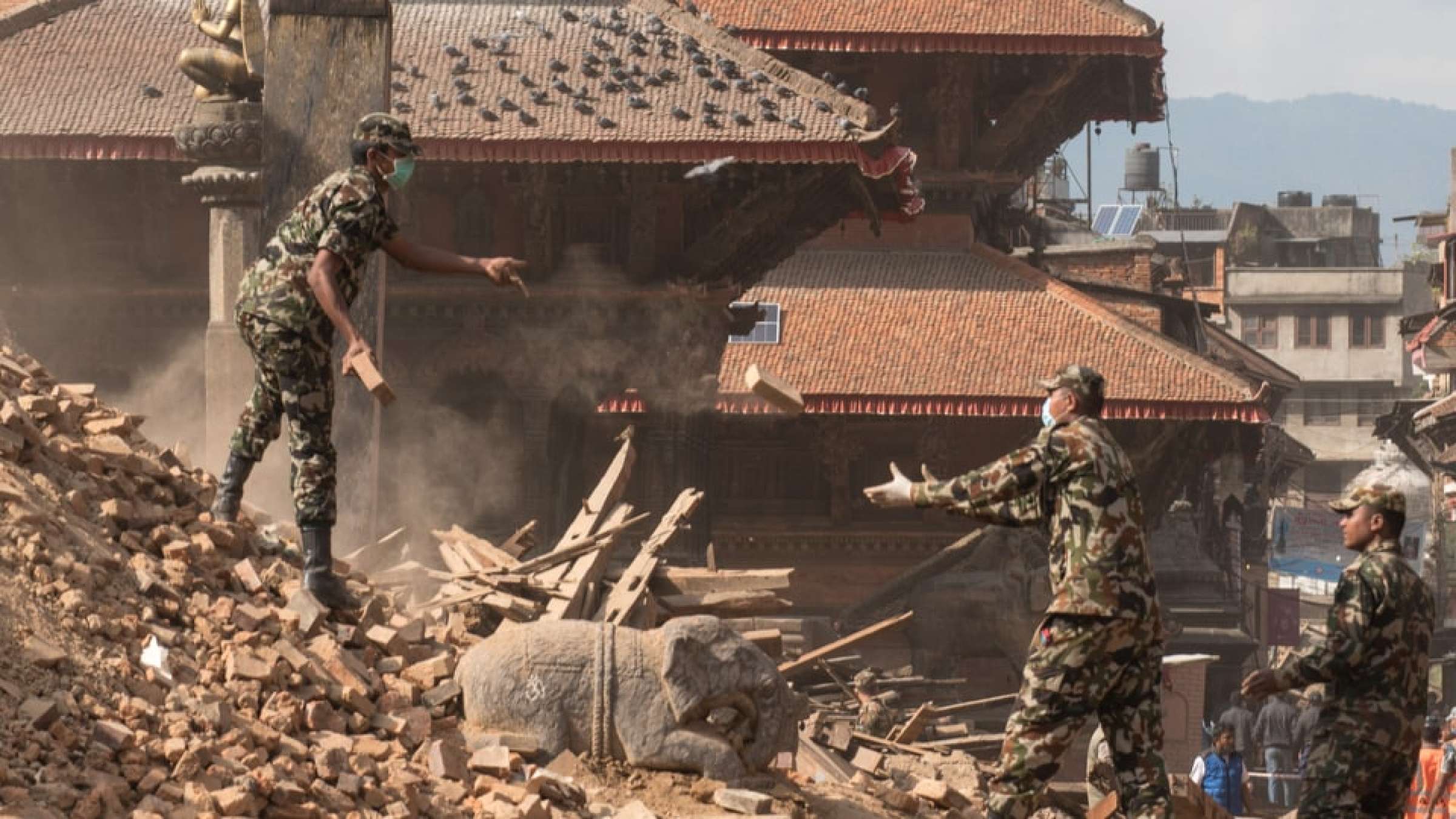 The Gorkha Earthquake in Nepal occurred on 25 April 2015 and had a magnitude of 7.6. Its epicentre was about 76km northwest of the capital Kathmandu. It was followed by more than 300 aftershocks. Around 9,000 people were killed, of whom approximately 55 per cent were female, and over 100,000 people were injured. Overall eight million people have been impacted, which is almost one-third of the population of Nepal.

The housing sector was by far the most affected, also given that numerous houses in poorer rural areas did not have any seismic-resistant features. Over 500,000 houses were destroyed and another 269,000 damaged, which included historical and cultural monuments recognized as UNESCO World Heritage Sites. In addition to destroyed or damaged key infrastructure livelihoods, e.g. in the agriculture and tourism sector, have been also critically impacted. According to the Post Disaster Needs Assessment by the UN, World Bank and the EU the total value of the damages and losses of the disaster was estimated at US$7.1 billion, while the estimated needs for recovery were US$ 6.7 billion. The damages and losses of the housing sub-sector and the resulting recovery needs accounted for almost half of the total amount respectively.

According to the latest Independent Impacts and Recovery Monitoring by the Asia Foundation around five years after the earthquake the large majority of the affected people live again in their own houses. Out of all households with damaged houses three-quarters now live in either a rebuilt or repaired house or another house not damaged by the earthquake. However, others continue to occupy damaged houses or those without seismic-resistant features. For many households the recovery from the earthquake remains a financial burden, demonstrated by prevalent borrowing. Four per cent who are still living in temporary shelters are in particular need of support.

This booklet captures the key efforts undertaken and results achieved over the past three years by UNDP in line with the vision articulated in its Strategy for Earthquake Recovery Assistance for recovery from the 2015 Gorkha Earthquake in Nepal.
United Nations Development Programme - Headquarters 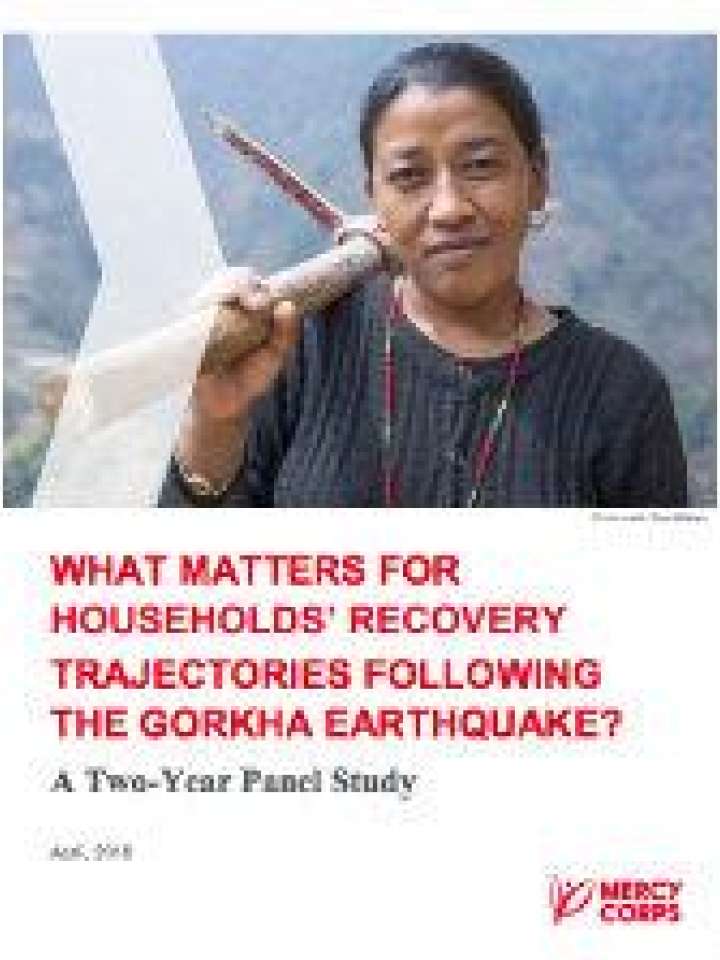 To understand what mattered for recovery in the short and long-term, this study followed the same households 10 weeks, one year and two years after the Gorkha earthquake in Nepal. The analysis will explore what factors mattered most for short-term coping and longterm recovery in order to improve humanitarian response and design of recovery programs in the aftermath of acute disasters.
Mercy Corps 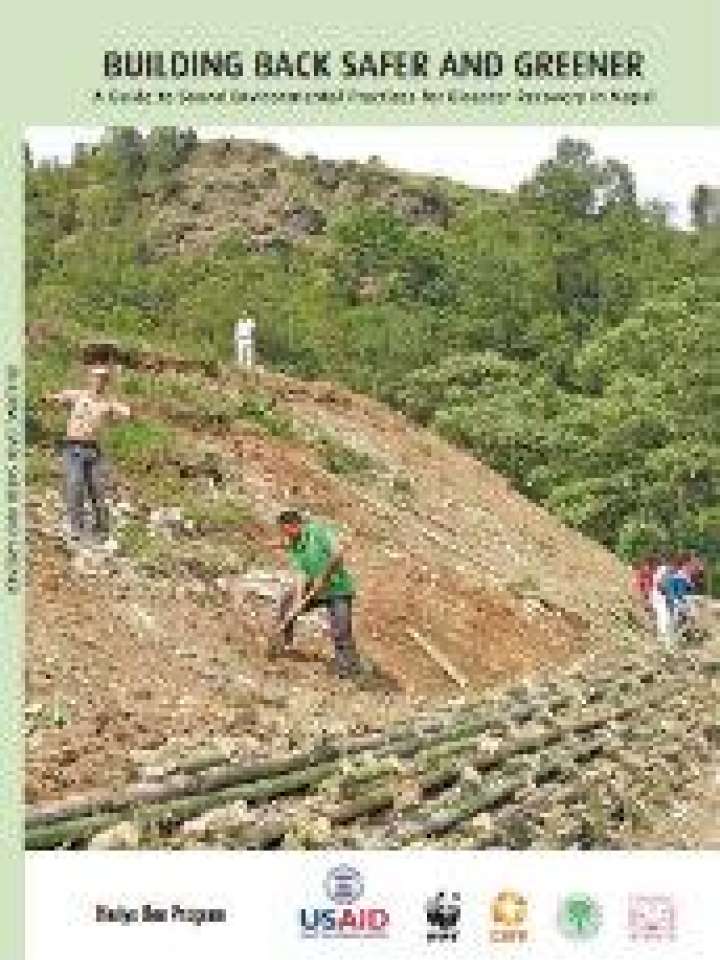 Building back safer and greener: A guide to sound environmental practices for disaster recovery in Nepal

This guide outlines ways in which adverse environmental impacts can be avoided after disasters, and good practices can be promoted. It covers sectors including settlements and land use planning; building construction; waste management; energy; infrastructure; water, sanitation and hygiene; agriculture and livelihoods; and education. It highlights the importance of flood risk management, landslide prevention and treatment, and management of forests after disasters.
World Wildlife Fund - Nepal

This brochure offers a succinct look at UNDP’s key contributions to Nepal’s recovery and the efforts to Build Back Better and Stronger over the past two years.
United Nations Development Programme - Headquarters 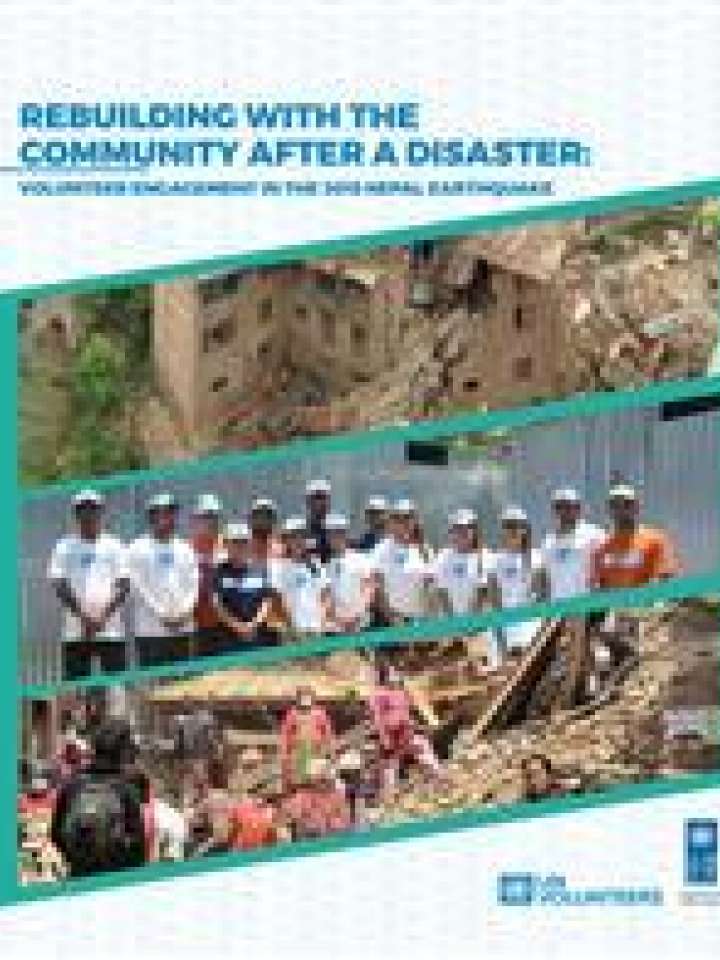 Rebuilding with the community after a disaster: Volunteer engagement in the 2015 Nepal earthquake

This document presents the findings of a study on the role of volunteers in response, recovery and community rebuilding following the 2015 Nepal Earthquake. It found that volunteerism served to strengthen local institutions in the disaster-affected sites, mobilize and develop the capacities of distraught communities, and increase coordination efforts among key players that responded to the earthquake. Volunteers were also trained to "build back better" in the reconstruction of buildings to decrease vulnerability to future disasters.
United Nations Development Programme - Headquarters United Nations Volunteers 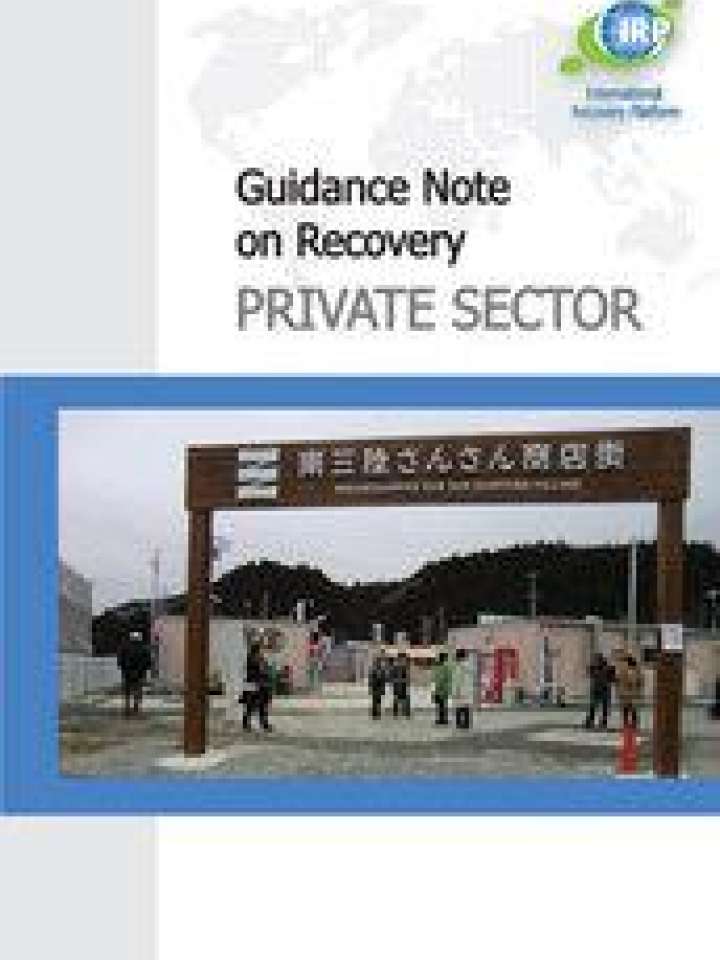 This document attempts to fill knowledge gaps regarding the role of the private sector in disaster recovery and draws from the wider body of knowledge and from documented experiences of past and present disaster planning and recovery.
International Recovery Platform 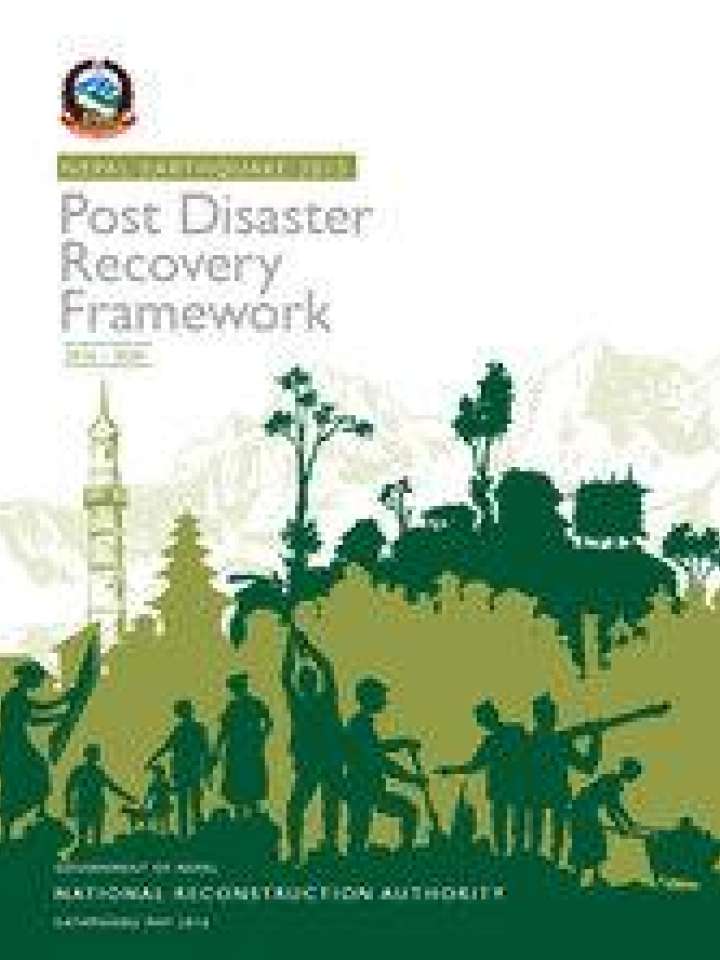 This framework document encapsulates the vision and strategic objectives that guide recovery in post-earthquake Nepal. It also includes the policy and institutional frameworks for recovery and reconstruction and outlines implementation arrangements, projected financial requirements and immediate next steps necessary for recovery.
Nepal - government 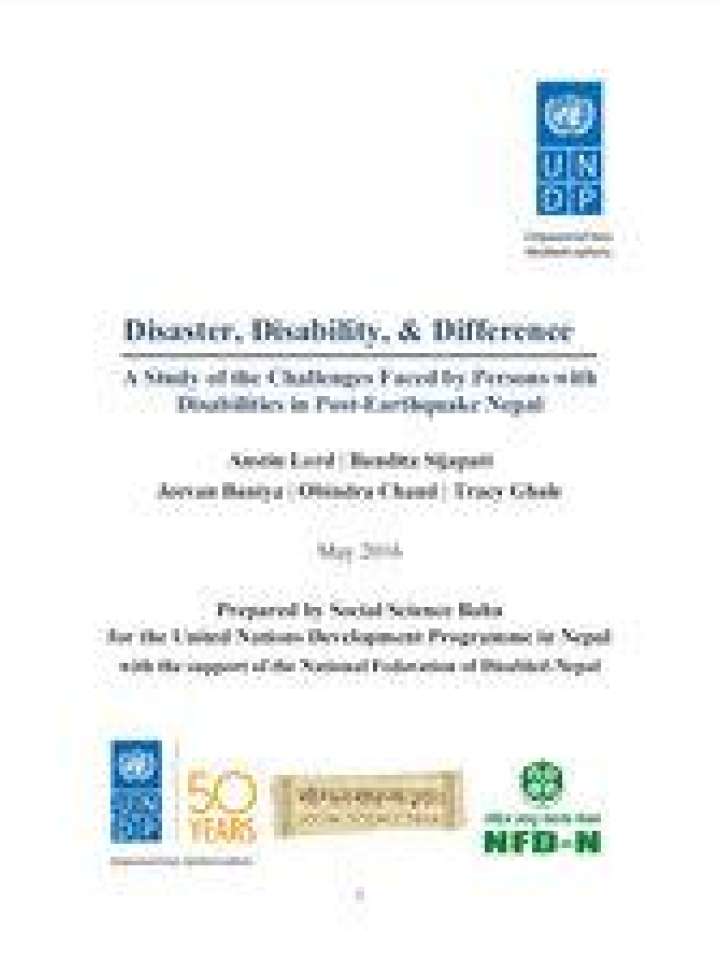 This report, written for the United Nations Development Programme in Nepal, empirically assesses the contemporary landscape of disability in Nepal, with a focus on the unique challenges faced by persons with disabilities (PwDs) in the wake of the earthquakes that devastated Nepal in April and May of 2015.
United Nations Development Programme - Headquarters Social Science Baha National Federation of the Disabled, Nepal 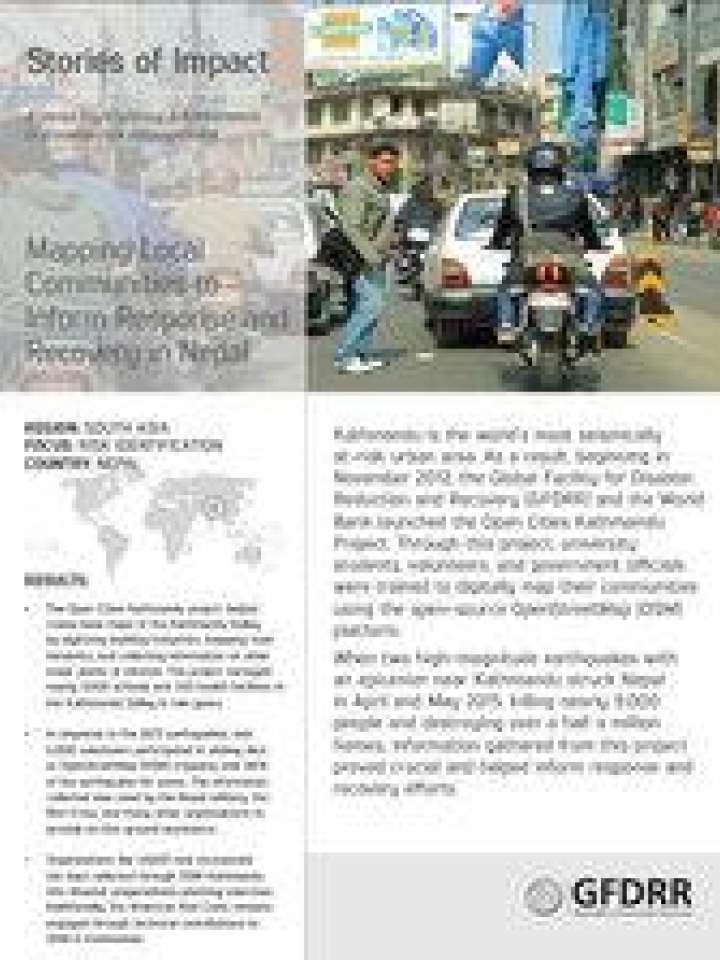 Mapping local communities to inform response and recovery in Nepal

This case study highlights the achievements in disaster risk management in Nepal in the context of the 2015 Gorkha Earthquake.
Global Facility for Disaster Reduction and Recovery, the

Save the Children’s earthquake response in Nepal: a special one-year progress report