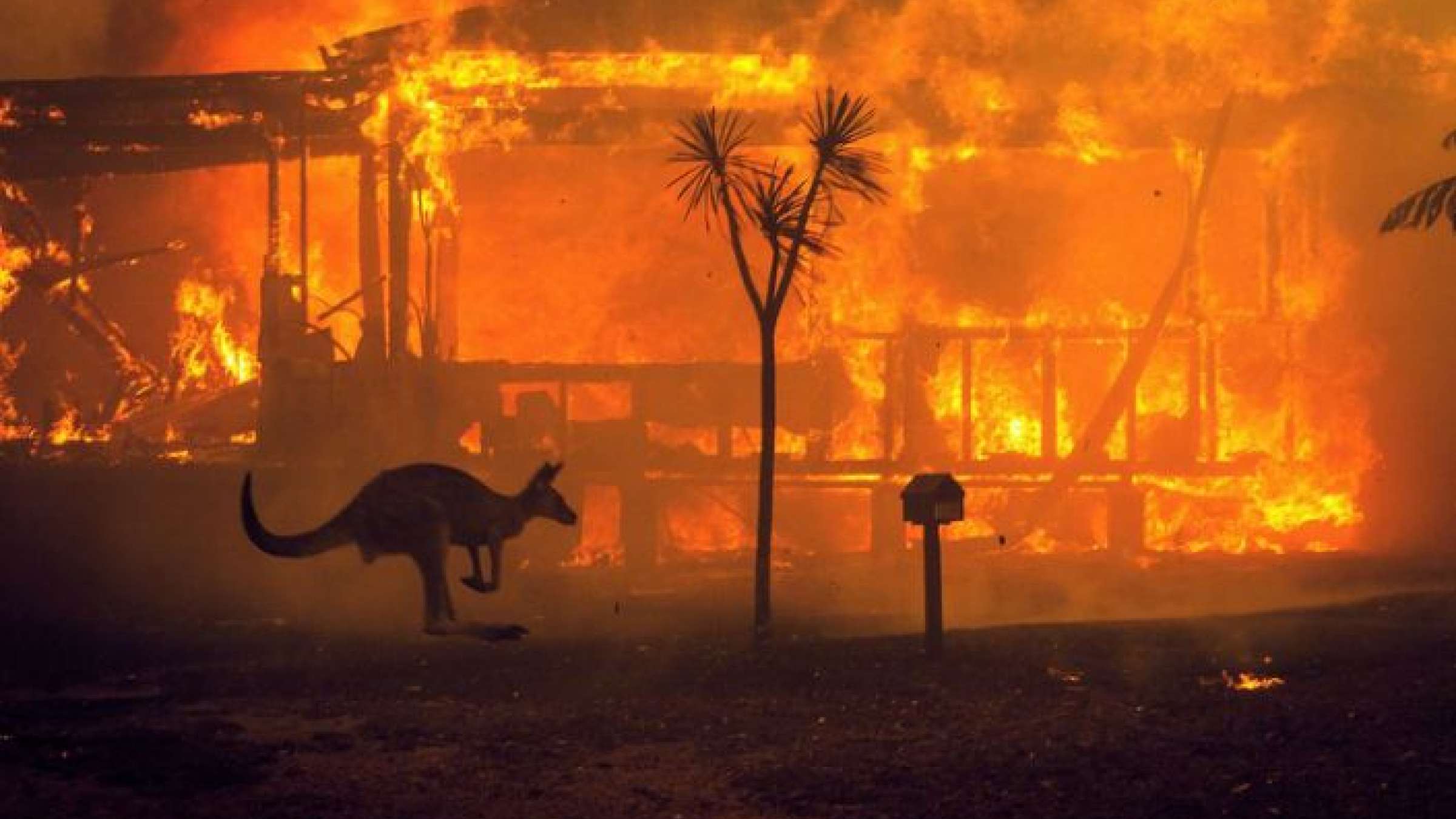 The 2019/2020 Australian bushfire season (also known as Black Summer) that started in September 2019 to February 2020 generated many major bushfires that burned for months and raged through many Australian states including New South Wales (NSW), Victoria, Queensland, the Australian Capital Territory, Western Australia and South Australia. It caused 33 deaths, of which nine were firefighters; destroyed 3,094 houses; and burned over 17 million hectares (ha), including 210,606 ha of land on Kangaroo Island and 90,000 ha of national park in South Australia. This was considered the worst in decades, with the size of area burned greater that in the Black Saturday 2009 and Ash Wednesday 1983 bushfires combined. It is estimated that over one billion animals perished, with more than 800 million of those in NSW, making the fires the worst wildlife disaster in modern history. In early 2020, 810 priority species and ecological communities have been identified for urgent management intervention. According to scientists, recovery and restoration of native flora and fauna need an annual investment of $16 billion to avoid extinction risks.

Because of the devastating impacts of the fires, the Australian Government announced the establishment of the National Bushfire Recovery Agency (NBRA) and the $2 billion National Bushfire Recovery Fund on 6 January 2020. The NBRA was established, in addition to existing arrangements for disaster recovery, to help coordinate and support the recovery of communities affected by the Black Summer bushfires. The crisis also triggered the establishment of the Royal Commission into National Natural Disaster Arrangements on 20 February 2020, which looked into the large scale disaster and examined climate change and a harmonised approach to hazard reduction. On 13 November 2020, the Royal Commission released its report, highlighting a clearer role for the Australian Government in all phases of disaster. The Government response to the Royal Commission foreshadowed the establishment of the new National Recovery and Resilience Agency, which included the functions of the NBRA, on 5 May 2021.

The recovery from the Black Summer bushfires was expected to be long and hard, with the added challenges of the COVID-19 pandemic. The Black Summer Bushfire Recovery Grants Program supports the recovery efforts of communities in eligible Local Government Areas, with approximately $276 million made available over three years from 2021–2022 to 2023–2024. Over two years on, however, some affected families still live without adequate housing and access to water and sanitation. Rebuilding efforts moved slowly because of planning challenges, materials and labour shortages, price increases, underinsurance, and pandemic restrictions.

The massive geographic scale and severity of the 2019/2020 Black Summer bushfires form part of a confirmed trend of worsening fire weather and larger, more intense wildfires caused by climate change. It has sparked growing interest in building sustainability into fire risk management and the landscape, the potential role of anthropogenic climate change and likely future trends of wildfires in Australia and around the world.

This infographic shows the impacts of the 2019-20 Bushfires and the Australian Government's efforts to support the recovery.
Australia - government

Bushfire Recovery for Wildlife and Habitat

This infographic shows the overview of the Australian Government's efforts including impacts, funding and action, to support the recovery of its native wildlife and their habitats from the devastating Black Summer bushfires of 2019-20.
Australia - government

This paper presents the findings of the restoration efforts to help species affected by the 2019-20 bushfires recovery and persist in burnt and unburnt habitat with approach highlighting the scale, costs, and benefits of targeted restoration activities.

This report aims to highlight design considerations for conducting surveys to assess fire severity, habitat condition, threats, and the status of priority threatened species and ecological communities listed as most vulnerable to the 2019-20 wildfires.
University of Melbourne

The backbone of regional and rural economies: small business and community resilience

This study assesses the impact of natural disasters to small businesses, using two case studies, the Townsville floods of 2019 and the ‘Black Summer’ Bushfires of 2019-20, as well as the role that insurance plays in the economic recovery of the regions.
SGS Economics and Planning

This report presents the findings from the survey of Australians about direct experience of bushfires and smoke of the 2019 bushfires, and about climate change concerns and attitudes.
The Australia Institute

After the fires: the Impacts of the 2019-20 Black Summer Bushfires on the Wellbeing of Emergency Services Personnel

This report presents findings from the first wave of the After the Fires survey about the impacts of exposure to the 2019-2020 bushfire events on the wellbeing and resilience of first responders.
University of Western Australia

This paper presents the experiences of Aboriginal peoples and the response of their communities and organisation to the 2019-2020 bushfires in Australia, captured through various media articles, reports, submissions and testimony.
Australian National University

This documents presents the experiences and analysis of the Australian 2019-2020 bushfires and gives recommendation to inform the better natural disaster management in the country in the future.

This article presents the investigative analysis of the recovery of rainforest bird communities one-year after the 2019-2020 bushfires in Australia.