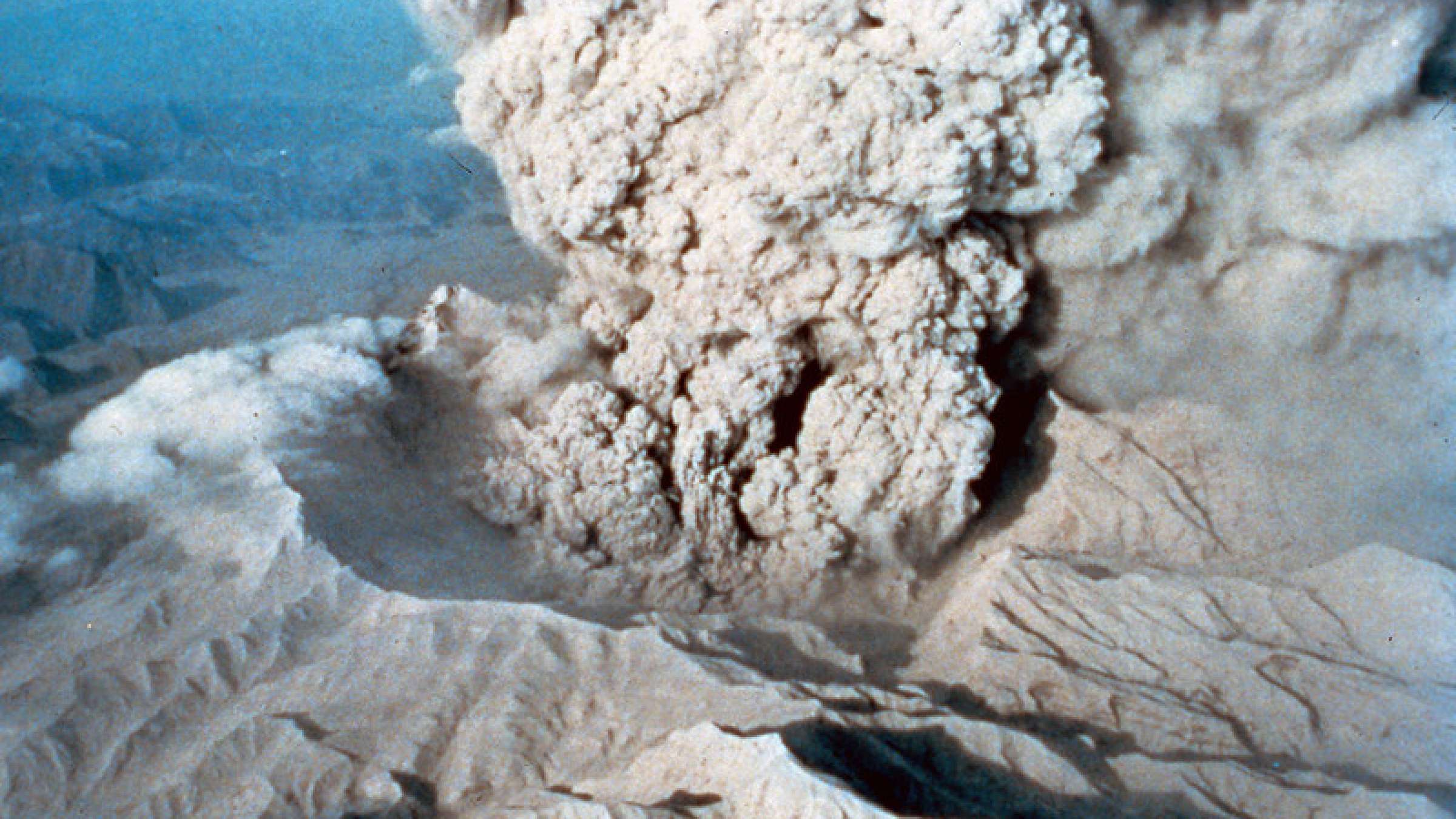 The eruption of Mt. Pinatubo in the Philippines in 15 June 1991 is considered one of the world’s largest volcanic eruptions in the past century. The eruption produced an ash cloud that rose 28 miles (40 km) into the air blanketing Central Luzon with volcanic ash and pumice. Pyroclastic flows roared down the slopes of Mt. Pinatubo creating new volcanic deposits as much as 200 meters thick. On the same day, Typhoon Yunya crossed 75 km northeast of Mt. Pinatubo with rain and high winds bringing ashfall to many areas including Manila and Subic Bay and as far away as the Indian Ocean. Between 1991 and 1993, approximately 20 million tons of sulfur dioxide were injected into the stratosphere and spread around the world temporarily lowering global temperatures by one degree Celsius.

Scientists from the Philippine Institute of Volcanology and Seismology and the United States Geological Survey had been monitoring the volcano since April 1991 and predicted the eruption, allowing for a massive evacuation to be undertaken and saving more than 5,000 lives and preventing property damage estimated at USD 250 million. Many of the deaths (over 840) and injuries from the eruption were due to roof failures caused by wet, heavy volcanic ash, which would not have happened without the typhoon. In the years that followed, the deposited volcanic ash remobilized due to rain generating secondary mudslides and damaging bridges, irrigation canals, roads, farmlands, and urban areas during the rainy season. Damage and losses resulting from the eruption and subsequent lahars were estimated at PHP 10.1 billion (USD 374 million) in 1991, and an additional PhP 1.9 billion pesos (USD 69 million) in 1992.

Memorandum Order No. 369 creating the Presidential Task Force on the Rehabilitation of Areas Affected by the Eruption of Mt. Pinatubo (Task Force Mt. Pinatubo) was signed into law in 26 June 1991. Task Force Mt. Pinatubo, chaired by the Department of Budget and Management, was mandated to guide and coordinate all rehabilitation efforts of the government, the private sector and the international humanitarian organizations. It was succeeded by the Mt. Pinatubo Assistance, Resettlement and Development Commission (Mt. Pinatubo Commission) in 1992 to 2000 which administered the initial PhP10 billion rehabilitation fund and formulated the Integrated Plan for the Mt. Pinatubo Affected Areas in July 1994 which comprised rehabilitation programs for infrastructure, livelihoods and resettlement. Non-structural measures prioritized were flood/mudflow warning and dissemination systems (i.e., warning equipment, public education about lahar hazard, and hazard mapping), resettlement and evacuation system, and livelihood support. As an ad hoc agency, Task Force Mt. Pinatubo faced issues such as confusion of roles of government agencies, lack of communication and coordination, inadequate staff and equipment, and limited financing, among others. Erosion and lahars that covered the lowlands at rates unprecedented in the history of volcanic hazards mitigation or sediment control affected many more people for a much longer period of time in the provinces of Pampanga, Tarlac, and Zambales delaying recovery in these areas. The government’s resettlement program led to cultural changes and the redistribution of the population of Aetas, an indigenous community living on the slopes of Mt. Pinatubo.

The eruption of Mt. Pinatubo broke ground in many ways changing the understanding and approach to volcanic hazards including new understanding of triggers for eruptions, the discovery that excess gas makes for more explosive eruptions, details about atmospheric circulation, evidence that humans cause global warming, the importance of effective communication, and being the first to successfully mobilize widespread evacuations. The recovery from the Mt. Pinatubo eruption provided many lessons which have informed actions by the government prioritizing preparedness and recovery from volcanic hazards in the years that follow.

ADRC. (no date). Eruption of Mount Pinatubo in the Philippines. URL: https://www.adrc.asia/publications/recovery_reports/pdf/Pinatubo.pdf

MEMORANDUM ORDER No. 373 CREATING AN INTER-AGENCY TASK FORCE TO ADDRESS ECOLOGICAL PROBLEMS AFFECTING IRRIGATION SYSTEMS AND AGRICULTURAL AREAS IN THE COUNTRY
Office of the President of the Republic of Philippines

Primary Succession along an Elevation Gradient 15 Years after the Eruption of Mount Pinatubo, Luzon, Philippines

This is the detailed survey of vegetation on newly created volcanic surfaces in the Mount Pina-tubo, Luzon, Philippines and provides a baseline for understanding the landscape-level processes determining continuing succession.

Challenges and opportunities for sustainable post-disaster resettlement in the Philippines

This study examines people’s experiences in post-disaster resettlement in the Philippines, focusing on the 1991 eruption and subsequent lahars of Mt. Pinatubo, the 2006 Mt. Mayon eruption, Typhoon Sendong in 2011 and Typhoon Yolanda in 2013.
University of Auckland

In the shadow of the lingering Mt Pinatubo disaster

This book shares the findings of study focusing on experience of Concepcion set against backdrop of lingering Mt. Pinatubo disaster in Region III to highlight opportunities and problems which may also exist in other municipalities similarly afflicted.

Benthic foraminifera from the South China Sea were studied to assess mass mortality and to monitor the composition and recovery of the benthic communities following the 1991 Mt Pinatubo ashfall.

This paper is about the project focused on the investigation of the post-eruption hazards at Mt. Pinatubo (Philippines) using remote sensing data, and field observations of the 1991 eruption deposits.

This study presents the results of a survey of the mammals of Mt. Pinatubo conducted in 2011 and 2012. This work was undertaken to determine the nature of the pioneering mammal community in early successional habitat two decades after the 1991 eruption.

This thesis explores landscape response to and recovery from sediment loading in the 1991 eruption of Mount Pinatubo, Philippines from the drainage basin scale to mobility of individual clasts on the bed.
University of Washington

This study on recovering plant biodiversity on Mount Pinatubo may provide valuable insights that improve our understanding of recovery of other ecosystems following disturbances of all types.

Vegetation Succession and Land Recovery Process Based on Soil Properties in the Upper Mt. Pinatubo, the Philippines

This study examines vegetation succession and soil physico-chemical properties in the upper reaches of the O'Donell River, which have been affected by the seasonal lahar since the 1991 eruption of Mt. Pinatubo, central Luzon, the Philippines.